You know how people say that legumes "fix" nitrogen in the soil? Well here is how they do it:
Rhizobia!
Rhizobia are a type of soil bacterium which infect and form a symbiotic relationship with legumes. Together they create little root nodules where they "fix" the nitrogen (N)... that is to say they take atmospheric N (straight out of the air) and turn it into a form usable by the plant. For this service the plant trades carbohydrates.
There are many species of nitrogen fixing bacteria in two genera (Rhizobium and Bradyrhizobium) which infect different species of legumes. The Rhizobia that formed these lovely nodules is R. leguminosarum.
How you treat the crop will effect the amount of N left in the soil. The legume utilizes the N to grow itself so if you harvest the seeds and/or hay from a leguminous crop, you take most of the N with you out of the field. If you incorporate the biomass of the plant into the soil, you put the N back where it then becomes available to subsequent plants growing in that spot.
And... not all symbiotic relationships fix N equally well in the first place. Beans and peas (that's Pisum sativum the garden pea not Vigna unguiculata, the cowpea) are not great fixers of N (30-50 and 71-119 kg N/ha/yr respectively as opposed to 150-250 kg N/ha/yr for alfalfa, a fantastic nitrogen fixer... although interestingly, while vetch is a pretty good fixer of nitrogen, R. leguminosarum is also the symbiote for the entire genus Pisum which as we saw above, is kinda crap at it. Go figure.) Any N they fix they use and since you don't want to return the seed to the soil (you want to eat the seed) they don't really contribute much to the stock of soil N.
In summary, there are three impacts Rhizobia have on agriculture:
1. The symbiotic plant utilizes the N during its life to grow better. So for example, peas inoculated with Rhizobia grow larger and produce more seed than those that aren't.
2. Non-fixing plants in the vicinity may be able to immediately utilize fixed N. For example corn grown with beans might grow better than corn without beans.
3. The biomass of the plant which now includes all that N can be incorporated back into the soil where it used by subsequent plants growing in that soil. Vetch, by the way, contributes 50-150 kg N/ha/yr when grown as a cover crop with sufficient quantities of R. leguminosarum.

(this is the one I have although it's an earlier edition) by Nyle C. Brady and Ray R Weil, Prentice-Hall 2000.
Figure 7b in this document from the University of Hawaii is a great picture of what my root nodules would look like if I sliced them in half and had a better macro on my camera.
UMass Amherst has some info on growing vetch to enhance N in the soil. In my case, vetch just grows on its own but if you're interested in using it as a cover crop many places, including Johnny's Select Seeds and Peaceful Valley Farm Supply, sell bulk vetch seed.
Posted by Unknown 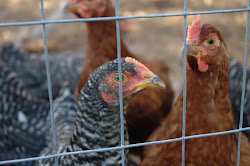